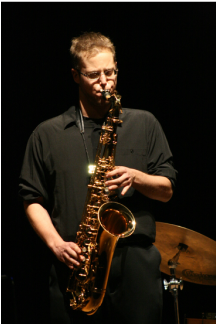 Primarily a tenor saxophonist, Strazz is most at home with the various jazz styles but has also been often heard playing in other styles such as classical, rockabilly, funk, bossa nova, rock, and soul. He has studied with many great South Jersey/Philadelphia musicians, including Denis DiBlasio, Carl Cox, and Tony Salicandro.

So what makes Strazz stand out from other young saxophone players? Strazz’s saxophones boast a mellow and warm sound, alluding to influences such as Stan Getz, Sonny Rollins, and his all-time favorite, Dexter Gordon. His improvisations focus on melodic development and exploration in a way that hearkens back to the catchy style of the swing-era greats. Joe connects with audiences through his calm and collective personality reflective of his musical style.

Strazz is heavily involved in the world of music education. In addition to work as a school music teacher in the state of New Jersey, he has provided small clinics to several schools and has taught saxophone, jazz improv, and music theory in a private setting.  Joe is also a supporter and member of the National Association for Music Education.

Joe has also dabbled in the world of arranging and composition. His publicly-performed works have caught the attention of his audiences through their unique style, well-planned orchestrations, and often some sort of surprise!

When he is not focusing on music, Joe enjoys numerous other interests, including creative writing, video games, visual art, theater, and philosophy.
Powered by